Due to our continued work on the Conservation and Preservation of  the Ipswich Road Hedge, Norfolk County Council in partnership with The Norfolk Wildlife Services have designated the hedge a ROADSIDE NATURE RESERVE. This scheme covers the whole of Norfolk and highlights the importance of our verges and hedges to the environment and identifies and protects wildlife and fauna.

It will also offer an element of protection in planning and highways terms. The designation will be marked by special posts in the verge. It is a great honour that our hedge has been chosen and we must thank everyone involved, especially all those who have donated to our fund and the exceptional group of volunteers who have worked so hard over the last three years.

A little update on hedge matters. I have been notified by County Council that there will be some  work on the main Ipswich Rd to the hedge which will involve cutting back from the footpath. This will be done by a machine. I'm not unduly worried about this as I think this will help with the thickening in the spring. They have been well aware of our planting and as we haven't gone that close to the footpath I can't really see our plants being in danger.

Next week I am to collect 2000 English Bluebell bulbs from Norwich in Bloom and I'll need a small team to plant these in the following week or two before the end of November. I propose to use these at the entrances of both Lyhart and Broadhurst Roads. I have been promised another 2000 next year.

Those of you who take the EDP or EEN may be aware of the death of Bill Webster from Norwich in Bloom  in October at the great age of 92. You may also remember him from his and Terry Baine's talk to us at our AGM. Over the years I have been fortunate to get to know Bill who has always been so keen on supporting us with our hedge scheme. I went along to his funeral yesterday at Earlham crematorium and represented our association in recognition of all he has done for us and community groups like us.

I have been given some bat boxes by our very talented Eric Wilson who has built them all himself. As they are different to bird boxes in that they are hung in groups I have asked Nick Cooper from City Council to give me advice on where and how to hang them. Once I'm clear on that I'm going to get husband Les to get his ladders out and hang them for us.

Finally I just wanted you all to know that I have finished planting just over 500 mixed Daffodil and Tulip bulbs in our back garden. I used my vouchers that were kindly given to me for my hedge work. I look forward to seeing them perform in spring Thank you.

Eaton Rise representatives Kathleen Rowlands, Richard Waterfield and Janet Bearman went along to City Hall on March 6th to collect our ECO Award Certificate for the conservation work we have achieved on the Ipswich Road hedge. The certificate was presented by the Sheriff of Norwich.

A report on the Ipswich Road hedge appeared in the EDP recently. Click here to see the full article. 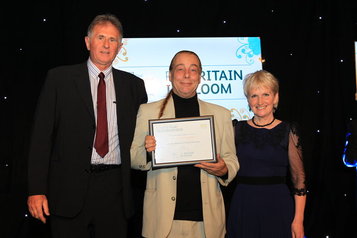 Kathleen and Les Rowlands collect the award from Bob Flowerdew
Eaton Rise Residents' Association has picked up another award for its continued work on the Ipswich Road Ancient Hedge. On October 12th Kathleen and Les Rowlands represented ERRA at the RHS Britain in Bloom Awards in Cleethorpes where they were presented with a National Certificate of Distinction by Bob Flowerdew of Gardeners Question Time.  'We were one of nine communities nationally who received this coveted award', said Kathleen. 'Having seen many of the other amazing projects across England, Scotland, Ireland and Wales which didn't make it we should all feel extremely proud?' She continued, 'Bob Flowerdew was very friendly and entertaining, over the course of three hours his smile didn't fade once. The whole evening was like the horticultural equivalent of the Oscars with lots of glitz, slick presentation and an enormous amount of clapping!' 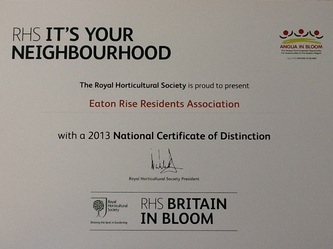 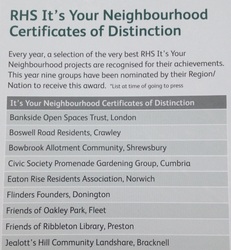 Our hedge is nominated by Anglia in Bloom

Click image for larger picture
This year we were once again included on the Judges route for Anglia in Bloom. Kathleen Rowlands, Chair of the Eaton Rise Residents Association was invited to go with a team from Norwich in Bloom to the awards ceremony on September 10th in St Albans.

Eaton Rise Residents Association was nominated in three categories. We were included in the Eaton Ward under Urban Communities and received Silver. We were nominated for Best Conservation Project Award and received a certificate of nomination, finally Kathleen was nominated for the Roy Lacy Award in recognition of her contribution to the scheme she also received a certificate of nomination.
For further details on Anglia In Bloom go to angliainbloom.co.uk


Pictured above is Kathleen Rowlands with Bob Ollier Chairman of Anglia in Bloom and Sue from Norwich in Bloom, with the Eaton Rise Residents Association certificate of nomination in the Best Conservation Project category. 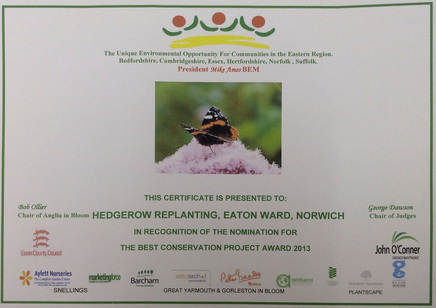 Certificate of nomination in the Best Conservation Project category.

The hedge is now a Roadside Nature Reserve. 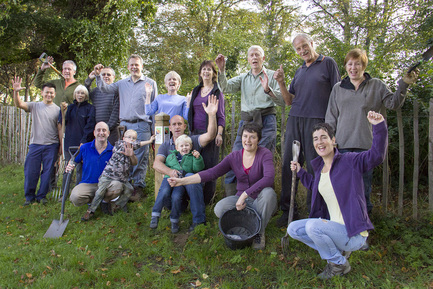 The happy volunteers! Click for large version
Some of our very happy volunteer workers by one of the posts that are being put along the Ipswich Road hedge. Due to our continued work on the Conservation and Preservation of this ancient hedge, Norfolk County Council have designated the entire 580 metres a Roadside Nature Reserve. This scheme covers the whole of Norfolk and highlights the importance of our verges and hedges to the environment and identifies and protects wildlife and fauna. It will also offer an element of protection in planning and highways terms.

The designation is a great honour and  we must thank everyone involved, especially all those who have so generously donated to our 'Hedge Fund' and the exceptional group of volunteers who have worked so hard over the last three years. Well Done!